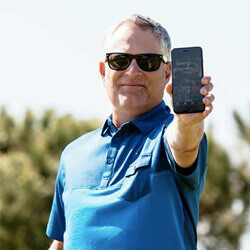 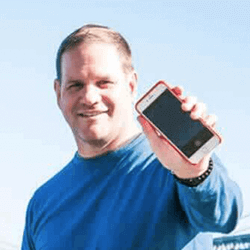 Golfers are always looking for ways to improve their game...

But what if you could improve simply by listening to music?

Golf BPM was created to help golfers of all levels to hit straighter, farther and more consistent simply by listening to music.

In 2001 when Doug Timmons walked on the driving range after the iPod was invented, he noticed that more and more golfers were listening to music while they practiced golf.

Being curious and a lover of music he would ask everyone what they were listening to. Doug is also a PGA professional, and he knows that listening to music is detrimental to the tempo and rhythm of a golf swing.

Every song is at a different BPM (beat per minute), rhythm, speed and cadence. In short, the music was changing the mood, tempo and rhythm of a golfer's swing from song to song... thus, creating inconsistency. And the key to golf is having a consistent and repeatable swing.

In the past he had worked with his students with a metronome, but he found that it was ineffective because of the hard, repetitive tones that golfers couldn't relate to.

He recalled when he was 13 his mother got him an old record by Masters Champion Jimmy Demaret. Demaret had created music you could time your swing to and develop perfect tempo. The music was a waltz and dated... but it worked, and the idea was still as fresh as it was when Demaret created them in 1959.

Doug contacted his childhood best friend Jeremy Callahan who he met in 1986 at a Junior Golf Summer Camp. Jeremy and Doug grew up playing junior and high school golf at Bidwell Park Golf Course in Chico, California and have been close friends since the first day they met.

Jeremy has been an entrepreneur and software developer since 1997. In 2011 he developed and founded his first mobile App business. Since then he has developed Apps for fortune 500 companies, small businesses and startups.

The idea was to create a music App with songs that have three prompts: One to start your swing, two to start your downswing and three to impact the ball.

The idea for Golf BPM was orginated in 2016. However, at that time Doug was focused on his apparel company "18 Greens" and coaching golf in San Diego. And Jeremy was working full-time at IBM and on an App he created called Shoe Swipe.

After toying with the idea for over a year they both decided now was the time to create the music, build the App and help golfers of all skill levels develop perfect tempo, rhythm and timing.

The missing element was finding a musician who could help bring the vision to the music. They worked with several talented musicians and DJ's and over the course of 9 months figured out all the sequences and BPM's.

At first Doug figured that it would be straight forward to put the beats into the music. But the more time that was spent in the lab the more complex the problems became. They spent months tweaking, analyzing and hitting golf balls to determine all the sequences needed.

After months of trial and error they discovered that there were four primary BPM's (126, 144, 156 and 184). And swinging faster didn't equate to hitting it further. It was all about finding the right tempo to match your natural swing and building tempo to create distance vs. swinging harder or faster.

Finding the four BPM's seemed like all that was needed but then, Doug compared the music with golf club motion sensors. These sensors are very popular with golfers and track the takeaway time (from swing start to the top) as well as the downswing (from the top of the swing to impact).

Years of data from the sensor companies has shown that there are three swing ratios that golfers swing at:

For example: a perfect 3:1 ratio could be .75 seconds takeaway and .25 downswing.

The best players in the world all consistently hit within these ratios within hundredths of a second. But let's face it... even above average golfers have no idea what their ratios are. And if they have a club sensor, they have no way to know how to speed up or slow down tenths or hundredths of seconds to adjust their ratios.

This is when we knew Golf BPM was the answer. If we could make tracks that covered all the BPM's and ratios, golfers could just hit to the music and they would have perfect ratios.

Every song we created have three prompts: One to start your swing, two to start your downswing and three to impact the ball. We decided to make a musical tone as well as have a voice over that counts: 1, 2, 3. The App user can mute the voice if they choose.

With all the science and testing completed it was up to Jeremy to create an App interface that was easy to navigate and understand. What he came up with is straightforward.

Once you select those three choices you are taken to a "Player" page that resembles what you would see on Apple music with a few more options. There are drop-down menus to change the BPM's and club types as well as a mute button which mutes the voice over.

Our beats are so good you will actually play them when you are rolling in your car or in your cart. The beats are so effective that you can listen to them before, during and after a round so that you're always in the zone.

Music makes your body move... Is our tag line because sequence and timing play major role in both golf and music.